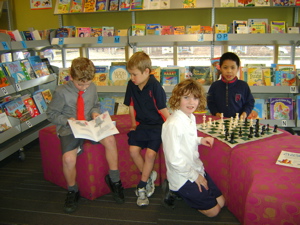 Keeping warm in the library.

Jordan enjoys sharing his reading skills while others play chess on the first day of winter. 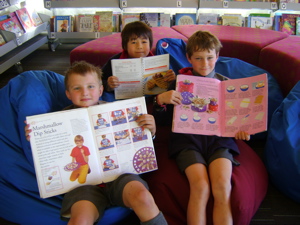 Not only did these boys borrow a bunch of cook books from the library but they also brought in  some of the yummy food they cooked for me to eat.

I was treated to a delicious slushy, yummy chocolate cake and delightful chocolate   brownies with lollies inside. I  will end up very fat if I keep eating their cooking.

Thanks Kyle, Jack and Ryan for your wonderful food.

There are always plenty of cooking books in the library so why not check them out and   do some baking like these boys.

Urgum the Axeman by K. Poskitt

as reviewed by Team 9

A sensational comedy that has you hooked from the start, Urgum has the whole Lost Desert trembling. For kids who like the savage world of roasted giraffe and sons diced up into seven different bags……..

Urgum the Axeman is the fiercest savage the lost desert has ever known. When he goes on a unicorn hunt with his seven sons, the twin barbarian gods Tangor and Tangal decide to play a prank on him. After 3 days hunting he returns home to Golgarth Cragg to find that ten years have passed. Suddenly he has a daughter and if that’s not bad enough, his wife Divina has given their cave a make over!

Between fighting filthy Nappars, scaring softhands and getting stuck down his new toilet,  Urgum spends some time getting to know his new daughter Molly and a host of other characters such as Olk, Mungoid the Ungoid, Hunjah the Headless, Grizelda and Mr Perkins from the Laplace palace tax department.

‘A really funny crack up book for any gender set in the Lost Desert in Golgarth Cragg.’

-A few good reasons why you should read Urgum:
1.Urgum’s  daughter Molly is a daring girl who will do anything to be the best savage in the Lost Desert.
Urgum’s wife Divina is the wifiest wife in the lost desert
Hunjah the headless isn’t called Hunjah the headless for nothing! Try chopping his head off with an axe and you’ll see why!

‘A book for all ages and not just for boys that will leave you laughing.’

– ‘A book which will have you yelling YARGHHH with delight!’

If you want to know more about Urgum or his author click here. 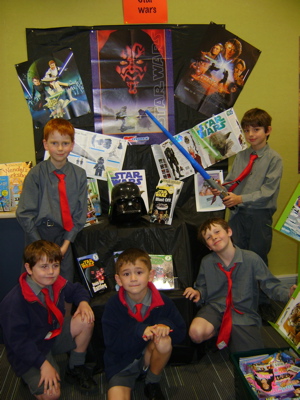 The display this week is Star Wars and the crowds are gathering. Come in at lunch time and browse some of the new STAR WARS books like these boys did.

You can also check out the web site with lots of games, activities and downloads.

Just new to the Treasure Chest shelf is the book  Alienography or How to spot an alien invasion by Chris Riddell, 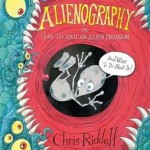 You can have fun on his site or check out another site he shares with Paul Stewart. Both write books together as well.

The Treasure Chest is a fun place to look at in the library. Heaps of special books with fold out posters, flaps, and envelopes.

Some of the other books on these shelves are pictured below.

Reading Crusade
The Reading Crusade challenge is on once again. All you have to do is read six books.
This great challenge happens every two years and this time you can enter online yourself.
http://www.christchurchcitylibraries.com/ReadingCrusade/
Keep an eye on our school library blog where we will place updates and ideas.
Also check out the  links for author websites, games and book lists.
There is also the wonderful Christchurch Kids Blog (http://christchurchkids.wordpress.com/)  where you will have chances to win extra prizes.
This is a great excuse to spend time reading during the holidays.

It’s great to see everyone back and school.

One of the new books that’s just arrived is Art & Max by the wonderful David Wiesner.

Here he is talking about the ideas and art behind his new book.

Hope you are all safe

The tragedy of the last week is still raw for everyone. However, by the time you  come back the library will be all clean and tidy and ready for you all to pop in and get something new issued.

Stay safe and I look forward to seeing you all soon.

Welcome to the library blog. All your old favourites are here but under a new look. Check out some of the latest posts, especially the book trailers. It would be great if you and your friends could make a book trailer for the blog.

Remember you can always send in a book review and let everyone else know what you are reading.

I’m looking forward to reading the book of the trailer below.

Wow!
Hilary and Meredith Badger just blew us all away with their talk about writing. All eyes were on the authors as they discussed how they came up with stories, characters and spy names. Everyone now wants to be a spy. I have had to purchase more books for the library because there are so many eager readers waiting for the next book to read. The authors were mobbed afterwards. A wonderful experience for the children but the authors were equally impressed by the FOS welcome from the Kapa Haka team.

Just tricking by Andy Grifths
Are you a practical joker? would you play dead just to get out of school,would you wear a gorilla suit to your sisters birthday. If so this is the book for you.
Just tricking is about about Andy Grifths when he was a boy and the practical jokes he made.
It’s full of tricky stories my favorite is ‘Beat the bomb’ Beat the bomb is a story Andy and his friend Danny they always play jokes on one boy but this time they have great sympathy for him.
Any way just tricking is a perfect book for people who love a laugh.If you have read it and like it look for more of Andy’s books.

Harry potter and the philsoss stone

Harry Pottter is about a boy whose parents are dead , killed by a dark wizard . He lives with his

aunt and uncle.When he turns 11 a mysterious letter informs him that he is  invited to
Hogwarts School of Witchcraft and Wizardry . But he is yet to discover that the dark  wizard is
back again and wants to kill him. I like this book because it is funny, exciting and adventurous.
This book’s author is J. K. Rowling.
by Jacob
0
Share

Walter wants to be a warewolf

In the story Walter wants to be a ware wolf

Walter’s family are all ware wolves but
for some reason Walter couldn’t turn into one
but close came the ware wolf party & poor Walter
couldn’t go.

I like this story because it is very creative as
Walter gets back at Walter’s bully at school.
read to find out what Walter becomes instead
of a ware wolf.

here’s a clue: it is a machine 🙂
BY ERIC

Night Bomber is about a flight engineer could   John smith. his plane crashes
will him and his team die read it and find out
0
Share

This story is about an inhabited island with all of these Dinosaurs and mutated monsters.

King Kong is an big gorilla who falls in love with Ann.
King Kong is a massive monster his story involves battles with dinosaurs, daring rescues and terrific escapes.
King Kong dies in the end by getting shot by all of these machine gunners in planes.
he has at least 100 wounds and he plummets to his death from the huge empire state building.
BY HUGO ROOM7
0
Share

***Don’t forget to check out the ESOL folder on First Class as this is regularly updated with newly made games and resources!***

www.tki.org.nz/r/esol/esolonline/
– This website is designed with units of work, links to activities and advise for New Zealand Primary Classroom Teachers, ESOL Teachers and ESOL Students.

http://babelfish.altavista.digital.com/tr i
– This is a website that will translate blocks of text and webpages.

www.childrenslibrary.org
– Downloadable stories in a range of languages can be found at this site. These books are in fourteen languages (they are not bilingual) and suitable for students aged from three to thirteen years old.

www.storyplus.com
– This site has a number of stories in French and English suitable for a range of ages.

www.manythings.org/e/tt.html
– Interesting things for ESOL students. This site includes word games, puzzles, quizzes, exercises, slang, proverbs and much more. It takes a bit longer to search and find appropriate activities but there are some useful things on the site.

These resources are most suitable for new English learners.
Each pack is barcoded.
They are for teacher issue only.