Born to run
Born to run is an action packed novel written by Michael Morpurgo and illustrated by Michael foreman.
Born to run was first published in June 2008. It is also sold as Best mate in some countries 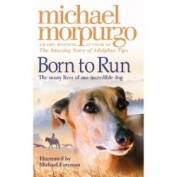 The story is about a dog who had many different extraordinary lives. First the dog was saved from being stuck in a bag in a river by a boy called Patrick. Patrick called the dog best mate and they were going to live happily ever after until on day Best mate and Patrick went for a walk to the park. Best mate ran down to the pond and………………………………………….
If you want to know what happens next get the book from your local library and read it yourself.

The WORST Thing About My Sister!

It is about a girl called Martina who likes to be called Marty and she’s an absolute tom boy but on the other hand her older sister Melissa is such a prissy pink girlie girl. The book is based on Martina telling us her life . Martina calls her bedroom her very own Marty Den and has a super hero called Mighty Mart that she dreams about night after night and wishes she was him. However when her sister Melissa finds something’s gone missing from her bedroom they end up on the ground fighting with each other until…. somebody goes that little too far and there’s an injury.

The Worst Thing About My Sister is a gripping novel that you will not be able to put down once you have started reading it so I really recommend reading this book especially if you have a sister you will be attached to this book like glue. 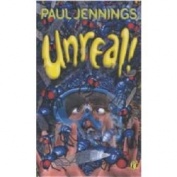 Unreal is a book of different exciting stories written by Paul Jennings. The stories include Without a Shirt,
The Strap-Box Flyer, Lucky Lips, Cow Dung Custard, Lighthouse Blues, Smart Ice-Cream, and Wunderpants.

My favorite is Lighthouse Blues. It is about a boy who comes to an island to help an old lighthouse keeper. However, every Friday night, music plays, and the boy suspects it has something to do with the lighthouse keeper’s ancestors.

I thought this book was great and exciting. I think that you should look for it in your library.